Monero XMR cryptonote coin was shown to have a massive drop in the last few days reaching prices of around $29 average from a high of around $57.  Almost a 50% drop in value overnight, but as hoped, Monero has rebounded to the $40 level.  Monero is a currency.  If you went to an arcade which uses tokens to play its video games and all you did was buy and sell tokens to customers for a profit, then you would never enjoy the benefits of actually spending the tokens.  Someone recently asked me, will Monero ever be worth zero?  And I responded that as long as there are two people in the world using the internet to upkeep a blockchain then Monero will never die, will never be worth zero.  By definition, as a currency, it has to have some worth to measure against. It would be pointless to send you 1,000 Monero XMR coins if the total worth was $0.00.  I can only assume that sometime in the future if Monero XMR is ever outlawed it may lose support and drop to zero and that transactions would still occur for legal reasons.  Friends keep asking for my advice on buying coins and I say, “bitcoin, ethereum, monero.”  BTC / ETH / XMR 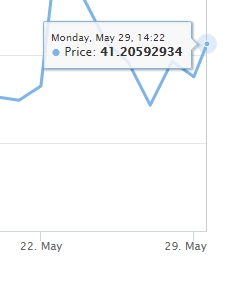